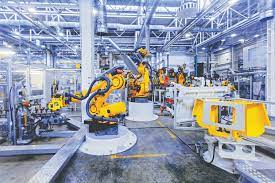 The fourth industrial wave has brought with it massive changes to every industry. With the rapid technological advancement, every sector is changing the way people do things, from learning to the health sector, agriculture, banking, name it. Manufacturing is swiftly seeking to automate processes, aiming to optimize processes and maximize production.

Yet this change is not without its challenges. Humanity is threatened by every new technology wave, fearing what we cannot understand. Many myths surrounded the invention of fire, and thousands of years later, many myths have surrounded factory automation.

Automation will replace all jobs

When you have been introduced to a machine that churns out 100 units of a product in the time it will take you to finish 10; it is natural that you will be scared. Knowing that every company seeks to maximize profit, you will be wary of redundancy and lay-offs, and this will probably translate to you rejecting it.

However, the reality is that automation will only shift the scope of work. It is supposed to take over the mundane, time-consuming tasks, allowing you the room to exert yourself in higher-level tasks. Factory automation is meant to pivot the human workforce into more creative and analytical roles, creating just as many jobs as it phases out.

The shift from a traditional system of production to an automated one is definitely a financial investment. It may involve the purchase of different equipment, their installation, and the training of employees. Sometimes the assumption of this expense is exaggerated, and the system is rejected for fear of being too costly.

While this may have held true at the turn of the 20th century when the world was just awakening to technology, information systems today are becoming more affordable. Factory automation may require initial capital, but the returns on this investment will be realized quickly. More efficient technology lowers the cost of production, leading to benefits to consumers in reduced commodity prices.

Automation is best only for large-scale operations

You may be tempted to assume that factory automation is valid only for large volumes of production that need to maximize their economies of scale and reduce costs to optimal levels. This, however, should be the goal even of small entities. While your small production house may not need gigantic robotic arms and conveyor belts to carry the product from one stage to the next, it will benefit from a customized packaging system that simplifies the final assembly stage.

Technology is often seen as a foreign language for those not within its scope. As with other conflicts, this language barrier may be a reason to reject automation. In truth, the tech language is being made simpler to access and understand each day, with the creators of this hardware and software working to make them more user-friendly and easier to absorb into your structure of work.

Automated systems can do anything and everything

It is often assumed that an automated system can easily fill every role in the production process, eliminating the need for human capital. The reality is that machines are not meant to replace humans. Rather, factory automation is meant to complement human skills, the two combining for increased synergistic value. This will mean lower production costs, higher revenue margins, and a multiplier effect of benefits even to consumers.

Automation is changing traditional production processes. It is here to stay and therefore must be embraced. It is helpful to understand that the perceived limitations are merely misconceptions and to seek the truth before choosing to be left behind.